The typical holiday period in Australia is a time that many savour. Annual leave passes are banked up throughout the year and pennies are stashed away to save up for that relaxing getaway, trip of a lifetime or some well-needed family catch-up. While holiday-makers on the other side of the globe are donning their gloves and beanies, we are shedding our skins to reveal board-shorts and budgie-smugglers. Far from a white Christmas, it is in fact, often pretty warm, bright and sunny. The sun is up super high in the sky and we have around 15 hours of sunlight to take advantage of. The air is abuzz with insects and beetles and trout simply cannot resist. It truly is a wonderful time to go fishing!

Not all trips are planned out well in advance, however. I had personally set aside a mission into the Western Lakes (yet to be completed) with the remainder consisting of some family hang-time. I was surprised when one of my wife’s best friends turned up to hang out, bringing along her partner from interstate who just so happens to enjoy the odd fish. Turns out that fly fishing had been on his bucket list for some time as well. The weather only compounded this increasingly positive set of circumstances by flashing up a twenty-six degree day in front of my face, like a dancing mayfly to a brown trout. For once, none of this was my doing. All I could do was wait for the words to float my way…. “Why don’t you take Ryan fly fishing?”. “Ok then” I nonchalantly concurred, “If you really want me to”.

As soon as he arrived we were off, while the fishing WAGS headed off for wine and lunch. Being a casual guide means that I’m sort of used to this caper, except, today I was feeling super casual. I was like the most-casual casual guide! If only I wore my casual pants. But I didn’t. I wore my board shorts. Because it’s summer. That’s what we do in Australia. Haven’t we been through this??

With Ryan kitted up, we set off. A quick tutorial and some casting practice in an open section soon followed. Unlike guiding, this time I get to fish. Win! It was a familiar stretch of river and once I had glossed over a few technical aspects, I couldn’t help but keep an eye on the location of my first victim of the day. It’s a little lie that produces a fish 75% of the time. A further 15% of the time may result in a missed take, dropped fish or a complete cluster-fuck all together. The point is, even if you can’t see a fish there, the chances are pretty darn good.

I wanted to show Ryan how it was done, from cast to capture, all the while commentating. Looking back, the scene probably sounded completely contrived but in reality, was perhaps a little self-indulgent. “So all I need to do is…” I began my rant on making everything come together – which sounds way more complex than when it all starts to occur unconsciously! I began a few casts in the opposite direction. “See, just like this…”. Making it sound like a piece of piss. What sort of wanker does this? “And now I’ll try this little bubble-line over this way – as there’s usually a fish here”. Right on cue, one of my little river pets, takes a natural off the surface. “See, there he is – I’m just gonna drift my fly over the top of him…. watch it, watch the fly…. there he is!” It all happened just as planned, with Ryan gob-smacked at the whole scenario, not ten minutes into his first fly fishing expedition. It was heaps cool. 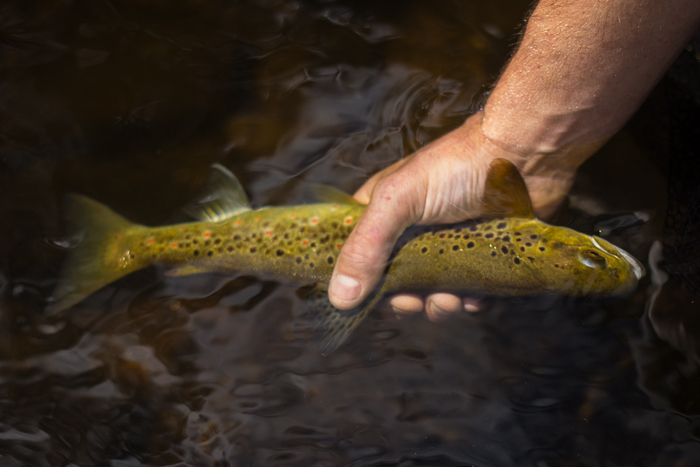 Next up was Ryan. He had never cast a fly in his life. Never actually seen it done in person, which is quite common. After seeing how we roll, he was bang up for the challenge. Spurred on by the fact that we could see rising fish in the slack water upstream.

Like most, he was a little hesitant to exert any real energy into the cast, at first, though I find this to be quite common. Once the cast has some form, it’s breaking down some of the other elements. The cast is one thing, but two of the most common steps that I find myself reminding people of is; 1. Lay your rod down (after the cast). 2. Place the fly line around your index finger (to begin your retrieve). Quite simple steps that seem to be a bugger to get the hang of!

After fifteen minutes or so, he was casting out presentations good enough to be eaten. I had planned for him to cover another reliable run but this didn’t produce so we soldiered on to the rising fish ahead. It’s a smooth section with hardly any flow and even the ripples from wading can shut the fish down. It’s always worth a shot though as there’s some little corkers that lurk within. Despite the complexities, he gave it a shot and was stoked to have his first take on the fly, his face beaming as he watched the fish come up to the fly. After assessing the challenges and tangling with the narrowing flora, Ryan kindly handed me the reigns to sort a couple of quick ones out. 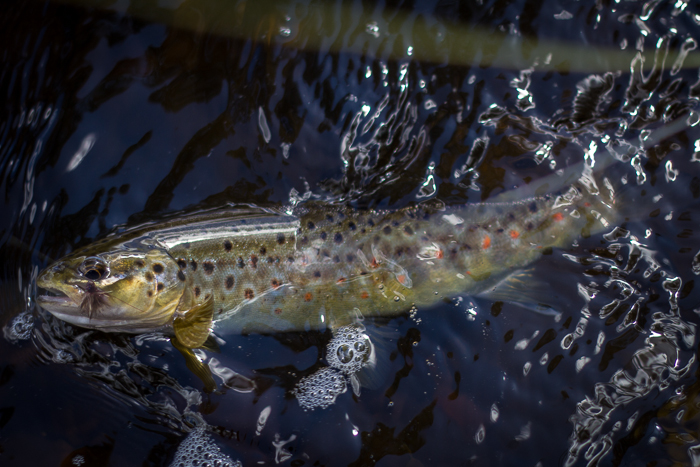 Impressed with how awesome it looks to have fish come up to the surface, Ryan was back in the game. We were fishing a little tail-out that was a hive of activity, with 5-6 fish spread out across the pool sipping away fairly regularly. After a few attempts, Ryan was getting very close to being in the right spot. The next cast was ahead of the fish but perhaps too far right – or so I thought. The fish raced over from a metre away to quickly scoff the dry. “Strike” I yelled, but unfortunately it was one of those slashy takes that happen so quickly so a hook-up didn’t happen. I assured him at that stage that he’s doing really well! 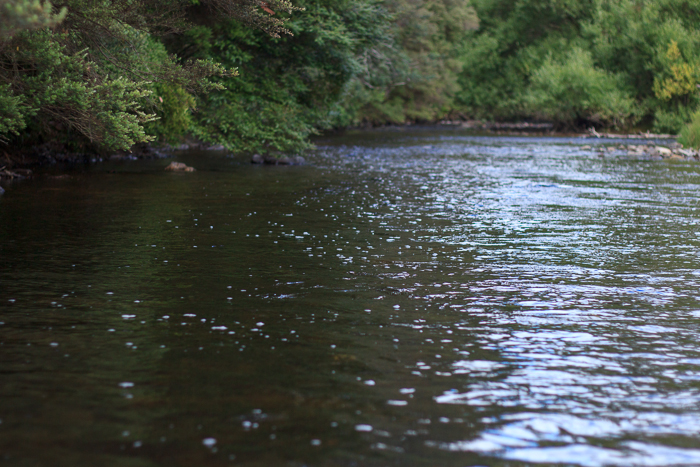 Yet another fish came up to his dry and failed to hook up – so close! 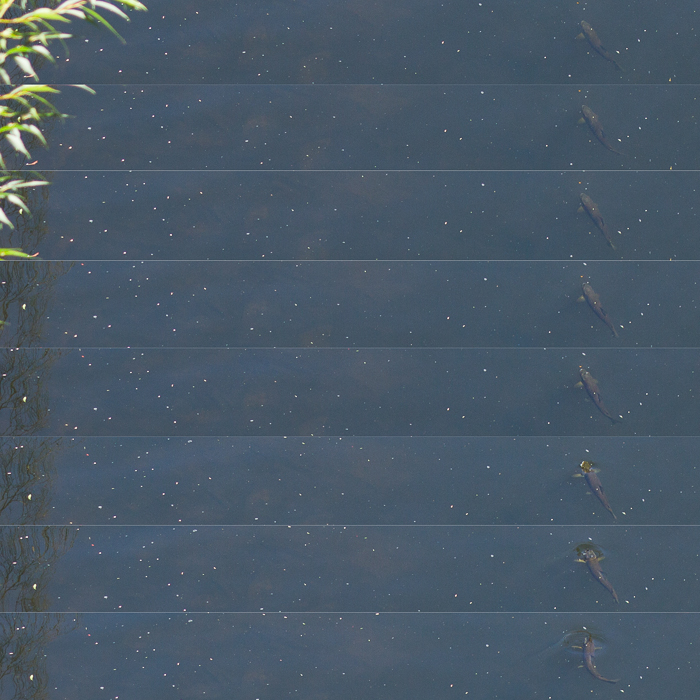 After hooking another one or two for good measure, it was time to focus purely on Ryan. I wasn’t going to let him leave without getting a fish on the fly. He had taken all the right steps thus far, just a little unlucky. We eyed off another run. This bubble line generally produces a couple of fish on the right day and today was a suitable candidate. We watched a fish working off the seam a few times and in a 1 metre radius. We mustered up some composure and waited for the next rise, all the while ready to fire at will. “There he goes, no hurry brother – just do exactly what you’ve been doing – remember to drop your rod after you cast and lay that line over your finger and get ready to strike”. Cast = sorted. Next step = mastered. Index finger = ready. The fish eats strongly and we’re connected – yes!!! A well-composed battle ends with the little brown in the net and the challenge is complete – Ryan is stoked. The only thing left to do was grab a couple of happy snaps and finish off with a celebratory ale (and a couple more fish). 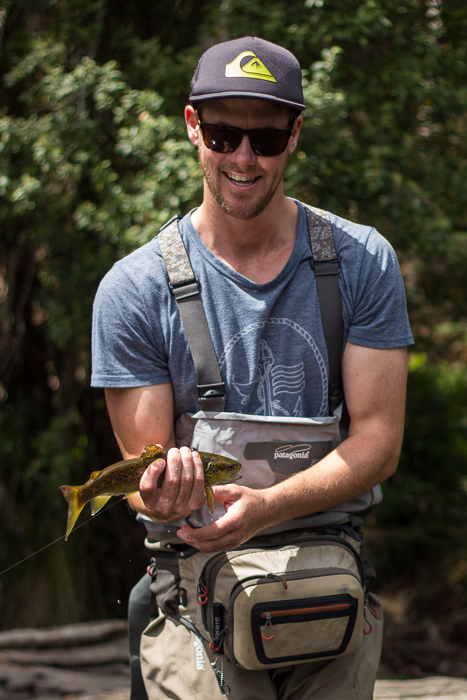 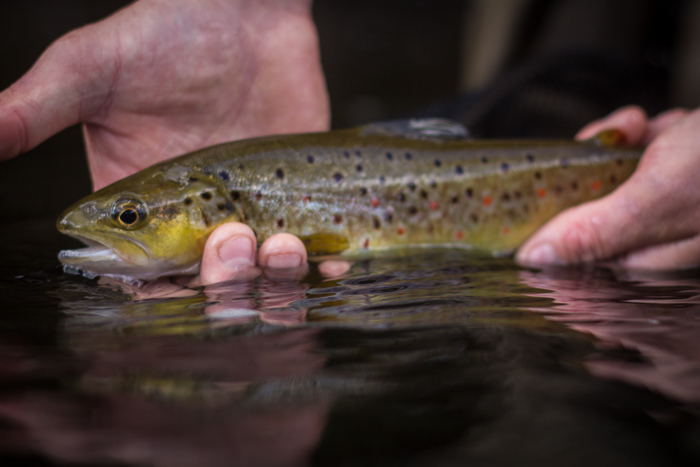 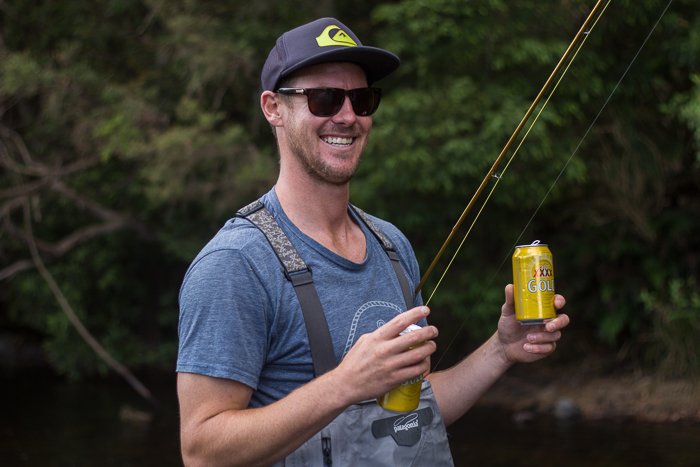 I guess it was not too dissimilar to an actual guiding day, except quite a bit shorter and more relaxing. However, like guiding, it’s not about the money, nor is it about following some self-absorbed dream. For me, it’s about inducing that stoke. You can’t buy that energy, but you can muster up the skills that you have learned along your own journey and try to make that happen. All the while, pointing out everything else that encapsulates the entire experience of being outdoors and immersed in the beauty of Tasmania. Cheers Ryan, catch you next time ye olde trout slayer!

2 thoughts on “The Holiday Hook-up”