To kick off the Christmas holiday period, I thought it would be rude not to drag a few blokes up a big hill.

As I’ve probably alluded to before – I fucking love fishing new waters. This statement really does need the emphasis of a swear word, as often I arrive at said new destination going ‘oh fuck’. Spot X was no exception….. except, this time I was announcing expletives not far from the car. We had to lug our arses up a bit of a steep climb but within 45 minutes or so the walk had flattened out. As per usual, the ‘mostly sunny’ forecast cast been dead wrong again and we were greeted with gale force winds, sleet and snow on our arrival to the first water. It was only early and the sun wasn’t up very high so nothing was sighted here. We rigged up anyhow and ventured up a small valley littered with little lagoons and a spring creek-cum- drainage creek. 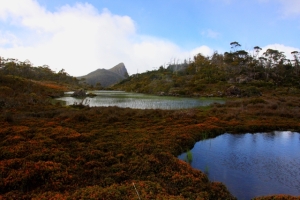 We meandered along trying to spot fish where possible in between squalls and sleet. Old mate managed to spot one in a reedy lagoon so we all froze. A nice little cast was made and the trout immediately opened up and said aaaaah. The angler was still asleep though and missed the strike. He made up for it by conveying several funny yarns along the way. Throughout his conversations, he mentioned at one stage that he fishes every day. Most people who would say this, with the exception of a professional guide would probably be pulling their dick – but you could tell in his humble sincerity, that he was absolutely correct. He backed up his statement by saying “In fact, I can’t remember a day that I didn’t go fishing…”. The man was an inspiration. He probably had twenty years on me, yet charged up the hill with barely a puff and commentating on the local flora while us fat bastards took a rest. It was his 37th season fishing out in the wilderness and he was loving it hard. I can only hope I’m like that when I grow old(er).

We made it to the end of the valley, and what was supposed to be a quick little bush bash over the hill ended up being a pleasant stroll through a dense Myrtle forest, followed by gruelling climb up and around a waterfall and several little cliff faces, all the while flirting with danger. So much so that one bloke had a near-death experience and if it wasn’t for a well placed tree branch – he would likely be devil fodder. I made note of this not-so-short-cut and we soldiered on.

We had reached the plains, and now all that was required was a cross-country walk while following the creek system up to Spot X. The water was up pretty high and after trying to spot fish in the creek for a bit, three of us gave up and just chatted our way along. Soon, we saw olde rooter duck down in that purposeful ‘I’ve seen a fish’ stance. We stopped and watched as he cast, lifted and landed a nice little creek fish. I always like it when someone lands the first fish, it’s like you can go home saying “yeah, ‘we’ got one fish…” even though you personally caught fuck all.

We reached the unnamed lagoon below Spot X, donned our waders and began prospecting. You could see a small amount when the sun popped out but for the most part we were blind flogging, which was a damn shame considering the waters were perfect for any sight fisher hoping to crack a fat simply over the water itself. Limp and cold, I exited the water on the other side without a touch. My mate had raised interest but a swirl and a semi was all he could rouse.

Next up was the top of the system – Spot X. Reputedly, it had been illegally seeded in the ’80s by some dedicated anglers keen to enhance their sport and help the trout to infiltrate the system, which was probably inevitable anyhow. Not a huge water by any means, but a nice silty bottomed lake with a slight hint of tannin. The water was up high, but still enough to wade in its entirety. Frothing, we spread out and searched. And searched. And searched. The peeking sun gave us a glimmer of hope and it wasn’t until two of us reached a rocky shore that we sighted some nice fish. The Cliffhanger hooked and lost two fish – one of them a cracker. I had a swirl but no commitment from an average fish, as did Andy. Old rooter had spooked two trout also. In total we had landed none. Zero from this water.

The call was made to fish another valley on the way back down the plain. To cut a long story short, we saw a couple and landed…. you guessed it – None. The rooter hooked one in a trophy water but to no avail. It probably seems like I will often do a lot of walking without success and for the most part this is probably true. To me, it’s all about the hunt – that natural desire to stalk and deceive. Being able to grass a nice fish is just as satisfying but sometimes you have to work hard. Fucking hard. 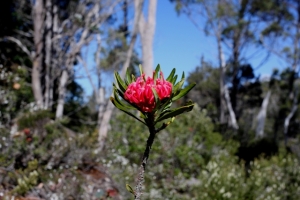 Andy had an appointment so bolted down the hill while the three of us limped our way back down through the flowering Waratah, with The Cliffhanger nursing a munted knee. It must have been close to a 30km round trip but well worth it with plenty of awesome sights seen and some new waters checked off my ever-growing list. After the drive home I rocked up and the missus said “How did you go?”….

One thought on “Spot X”