Ventured out to Four Springs Lake after work on Friday (affectionately known as Four Skins). Daylight savings allows for a 3-4 hours of light after hours which is more than enough for a cheeky little mission.

We dumped the boat in at around 5:30pm and there was plenty of red spinner at the ramp. A fellow angler had just put his boat back on the trailer and mentioned that he just scored his first on fly, he was stoked.

We found a sheltered shore and soon discovered a few duns popping. Surprisingly, we saw quite a few small flying ants on the water too. There were a few fish on them but they were quite sporadic. It was a matter of persisting and trying to get a fly in front of moving fish. On two occasions I was stripping my flies in quickly to re-cast at a riser and had fish follow my flies and boil at the boat – Don’t you hate that?! The best moment was spotting a nice back breach the water several times, and Andy chasing it down on the main motor. Got the Claret Dun into the path of this fish that was feeding hard and…. on!!

We managed a few, dropped a few and missed a few. Andy’s Carrot fly bringing a couple undone again, I’m gonna have to tie me up some of these! All in all it was a great start to the weekend. 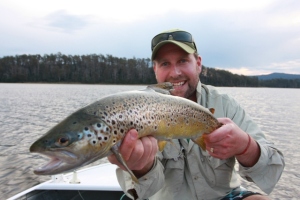