Anzac Day has a powerful meaning for many people, for many reasons. I remember years ago when we were kids, standing around the cenotaph in my Naval Cadet attire trying not to pass out while ironically, my brother passed out next to me. I kept my cool and zoned in on some old bird in the crowd while senior officers collected his limp body from the ground. There was a lot of emotion around that day. Especially in the pub at breakfast, respectfully listening to the stories from diggers as the tears welled up in their eyes. I may or may not have snuck a beer while Dad wasn’t looking…

For the past few years each Anzac Day has been spent chasing fish with the fly rod while taking a few moments to reflect on our wartime heritage. This year, the call was made to wander into Clarence Lagoon to chase brook trout with Nik and Andy.

Brook trout have been on my radar for a few years and I have managed numerous failed attempts to score one, despite having fished three of the four waters in Tasmania that hold wild, self-sustaining populations; Lakes Plimsoll, Selina, Rolleston and Clarence Lagoon.

Brookies (Salvelinus fontinalis) as we know them today were introduced into Tasmania in 1962 and the waters mentioned above show an element of success with natural spawning, while being supplemented with some stocking by Inland Fisheries. The fishery as a whole is in quite a delicate balance and as they struggle to compete with browns and rainbows, any accidental stocking or illegal releases would surely spell the end to this unique fishery in Tasmania. For example, Lake Leake was once stocked in the late 1800’s with brook trout only and held a wild fishery for some time until the introduction of rainbow trout in 1904 and the brook trout fishery collapsed soon after.

That’s why it holds such appeal to hungry anglers I suppose – To head out and chase something rare, unique and challenging. I say challenging because they are either ON or OFF. As I mentioned before, I have fished for them a few times in the past and each time they have been very much off. Andy did score one a couple of years back when we headed into Clarence and that has spurred me on since. 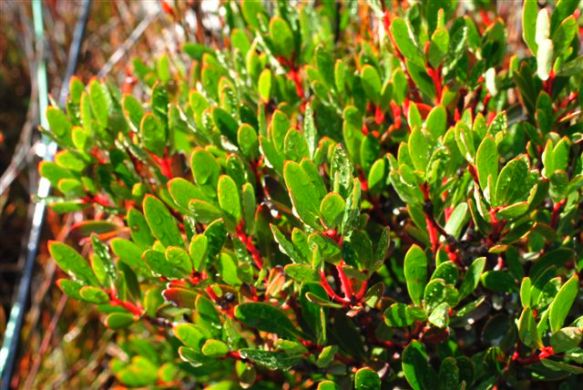 So as we wandered through myrtles, native warratah, celery tops and pepperberry, my thoughts turned to the fact that everyone you speak to that has experienced success says “Yeah mate, they love the rough weather”…. “Colder the better” they say. “When they’re on the chew, they’re as dumb as dog shit” they mumble. With the cool, cloudy and slightly windy forecast I thought “Yep, it’s gonna be on”.

An hour or so after leaving the car and we clamber over the last little stretch of hill to find the lake like a mill-pond and the sun starting to break through the cloud. “Dumb as dog shit” they say, as I calmly tell the voices in my head to piss off. 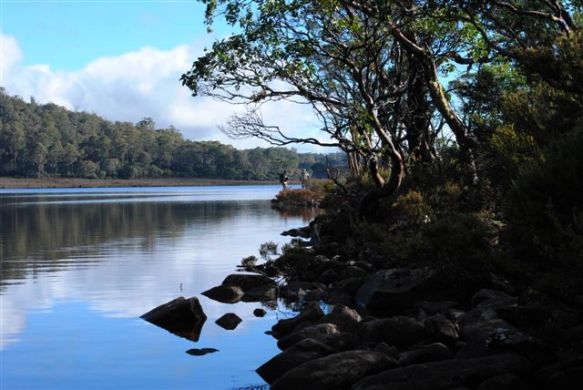 Still, we began rigging up, keen as ever while the leeches started making their way to the hot spots on the living corpses of Andy and Nik. I’m guessing the amount of garlic and chilli on the feast I cooked the night prior was enough to deter the blood-suckers, ’cause not one came near me (this time!).

The water looked good, and you could polaroid the tanin-stained drop off but no further. We spread out along the bank and yacked our way along while discussing flies and retrieve rates, parenthood and titties. (For some reason, fishing conversations always end up putrid). Nik motored up beside me and he was explaining some technical aspect about his new Sage ONE when he offered to give me a cast. I was keen to compare it to the TCX and jumped at the oppor-chancity. My first cast struck the bushes behind me and landed in a pile of crap in front. The second attempt fared much better and threw out a wonderful line as the tippet rolled out perfectly. Nik began yapping about his home-tied leader recipe and I recall commenting about the weightlessness of the rod when I felt this yank! Oh shit, I’m on!! “BULLSHIT” yells Nik, “Stop taking the piss” but he soon saw the excitement on my face as the headshakes made the rod pulse.

I couldn’t believe my luck – After a few years of trying, and several disappointments I finally snared one – all the while blooding my mates new rod in the process (how rude is that?). He did try to claim the fish but I told him to stick his claims in his top pocket. 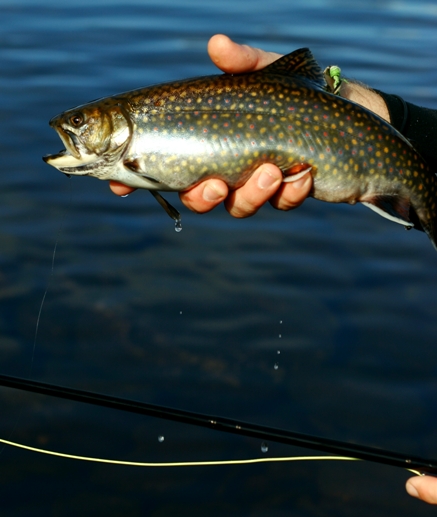 I soon found out how slippery these little fish were – Very different feel compared to ‘bows and browns and rather difficult to hold for a photo! 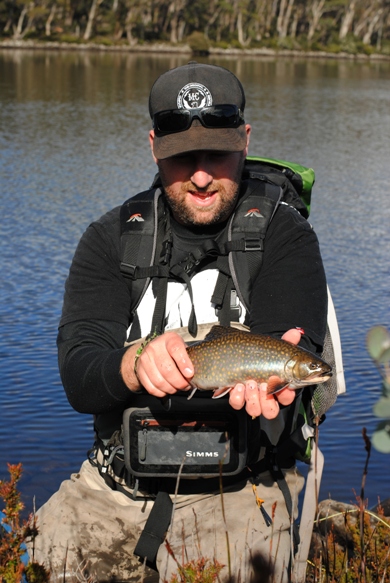 The colours on these fish are unreal – Pink and yellow spots, black mouths and a purple tinge with distinct red with white stripes on their fins. I’d love to see one in full spawning colours! 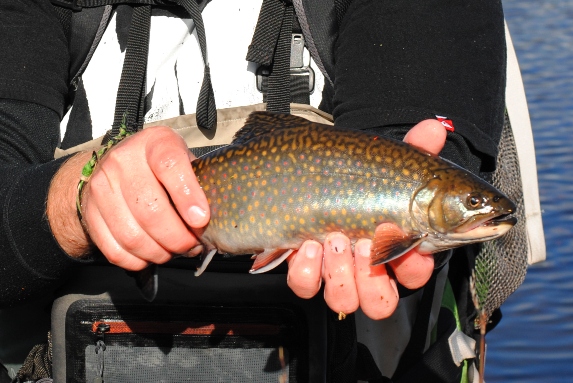 We continued on and laughed repeatedly at the awkward moment. Very fortunate for me, but part of me felt sorry for Nik, sort of. I’m not sure which part… maybe my arse. This certainly gave us some inspiration, coupled with the fact that the wind was getting up, it became really bloody cold and it clouded over. “Colder the better” they say.

Yet, hours on and apart from that tingling just above our numb toes we had not felt a thing. We had spooked two fish in the extreme shallows that appeared too big to be Galaxias. It was about then that I farted in my waders. Phwoar – Don’t fart in your waders.

We rounded the creek and things were looking grim in the catching department – Still, the scenery was magnificent and apart from Nik taking a tumble in the creek, everything was going smoothly. 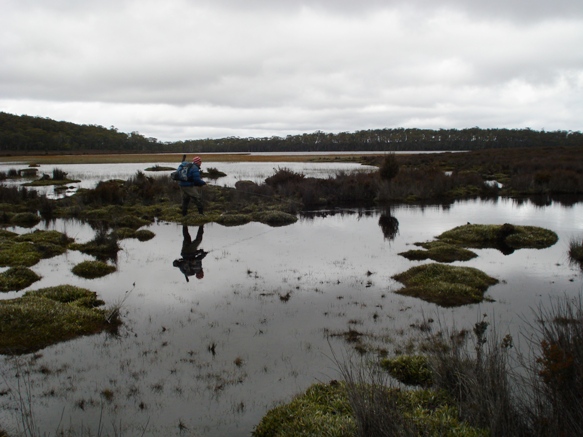 Back around the other side we were on the home run, and I think by this stage we had all fallen over at least once. I was admiring all the patterns on the alpine gums which I could have done for ages. These patterns were simply amazing. 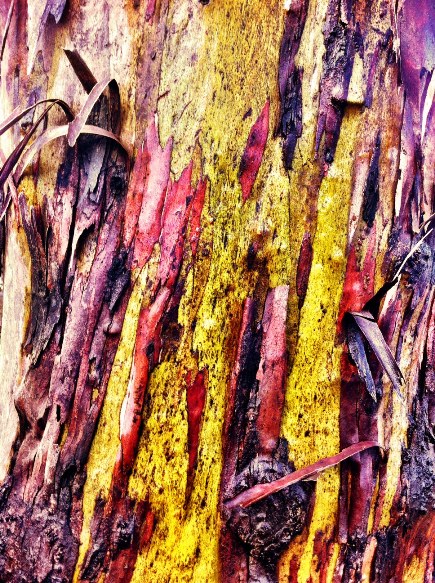 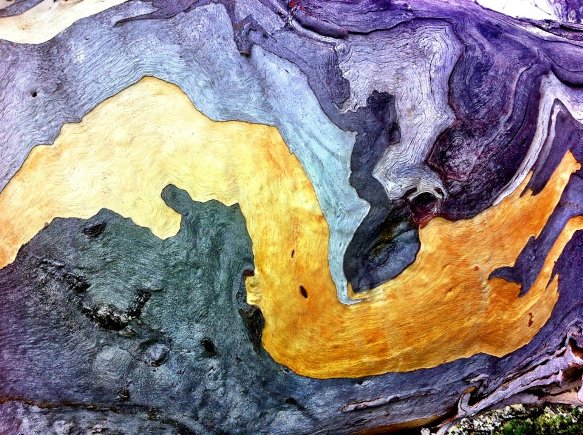 With my head in the clouds, or trees I encountered an unstable rock and completely ate shit as I fell over – Somehow avoiding a rod breakage as I laid on my bent rod. Perhaps it was Nik sticking a few pins into his voodoo doll.

An additional capture wasn’t to be as the fish failed to fire up, or we failed to fire them up. Regardless, it’s always great  to be out with a couple of good friends fishing, exploring and experiencing a true sense of mateship on a day founded on such bonds. Just don’t go catching a fish on said mates rod – You don’t want to test the friendship too often!